Tasman completed an unbeaten sweep through the Mitre 10 Cup to claim their first national provincial championship premiership title when beating Wellington 31–14 at Trafalgar Park in Nelson on Saturday.

Tasman was the first time since Auckland in 2007 that a team had gone through the campaign unbeaten.

Making the better start Tasman looked to be heading for a comfortable win but a strong defensive Wellington effort allowed them to claw their way back.

In the end it was one of Tasman's most inspirational players second five-eighths Alex Nankiville who finally sealed the win when making a crucial 78th minute break from within his own half before setting up wing Will Jordan for his second try to end the contest.

Intense Wellington pressure around the three-quarter mark threatened to derail the home side's hopes. It came after Vince Aso pulled off a midfield intercept and heading for the goalline. However, he was pulled down just short of the line by wing Will Jordan.

It appeared replacement wing Pepesana Patafilo had touched down for a try but a TMO check revealed the ball had gone forward from Aso's arm.

But Wellington refused to yield and it took desperate defence to hold Wellington out and it was replacement prop Wyatt Crockett who twice won turnovers at breakdowns in front of Tasman's posts to save the day.

Tasman got off to a strong start, first five-eighths Mitchell Hunt three penalty goals in the first quarter to gain early scoreboard advantage.

But it was old-fashioned, if often forgotten, chasing at restarts that allowed Tasman to heavy Wellington. Nankiville made himself an utter nuisance for Wellington at the restart.

In the 15th minute, he secured the ball from under Wellington noses, and with Squire and Strange took the ball into set-up phases and when released Hunt turned the ball back inside where Jordan came into the line from the blindside at speed to score.

Then at another restart, in the 22nd minute, Nankiville put pressure on again and Aso knocked the ball well forward. Tasman were onto it in a flash, Hunt again took a gap and gave fullback David Havili an easy run in for the try.

This is what it means to the @TasmanMako!#TASvWEL #Ours 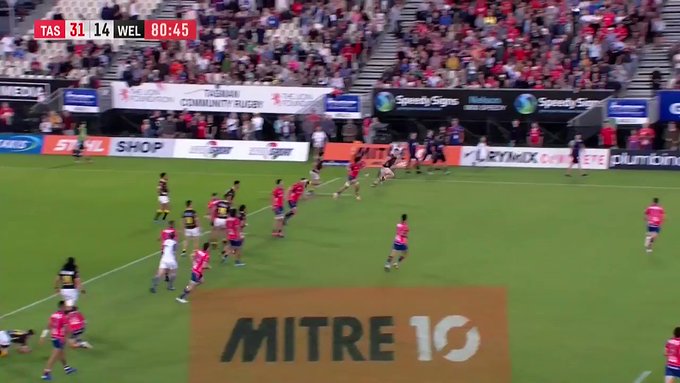 21 people are talking about this