After another season of action-packed rugby, allblacks.
com correspondent Andy Burt selects his form XV of 2016.

15: Selica Winiata (Black Ferns, Manawatu)
There was possibly no more influential player in the international game than Selica Winiata for the Black Ferns in 2016. The diminutive fullback crossed for an incredible nine tries in five Tests to help the Black Ferns to an unbeaten season. With explosive pace, sleek steeping ability and flawless timing, Winiata continually confounded opposition defenders and got the Black Ferns season off to a perfect start with four tries in the 67-3 win over the Wallaroos at Eden Park. Winiata also proved to be a steady last line of defence with an uncanny ability to read opposition plays and was rewarded with the Women’s Player of the Year Award at the ASB Rugby Awards. 13: Rieko Ioane (All Blacks, Blues, Auckland)
Relatively unknown at the start of 2016, Rieko Ioane made a flying start to the year with leading hands in the All Blacks Sevens tournament victories in Wellington and Sydney. But it was in fifteens where the 19-year-old outside back really made his mark. After a number of effective performances from the bench for the Blues in Super Rugby, Ioane was a standout in the Mitre 10 Cup for Auckland. Playing at centre, Ioane led the Mitre 10 Cup statistics in tries scored (10), metres made (812) and defenders beaten (62). His strong form resulted in a call up to the All Blacks for the Northern Tour where he became the eighth youngest All Blacks Test debutant at the age of 19 years and 239 days against Italy. 10: Beauden Barrett (All Blacks, Hurricanes, Taranaki)
The giant chasm in the All Blacks backline left by the retirement of Dan Carter was quickly filled by Beauden Barrett this year. The Taranaki product started the season with 223 points in the Hurricanes inaugural Super Rugby success before making the All Blacks number ten jersey his own. There was simply no better player on the international stage than Barrett in 2016. The 25-year-old racked up 152 points for the All Blacks across 13 appearances and was deservedly named the World Rugby Player of the Year in November.

After a stunning year in the @AllBlacks jersey, @beaudenbarrett is your World Rugby Men's Player of the Year 2016 #WorldRugbyAwards pic.twitter.com/Zk0HAep29R— World Rugby (@WorldRugby) November 13, 2016

9: Kendra Cocksedge (Black Ferns, Canterbury)
The 2015 World Rugby Women’s Player of the Year Kendra Cocksedge continued her dynamic form into the 2016 season. With slick passing, sharp running and accurate goal kicking, Cocksedge played a leading role in Canterbury’s charge to the Farah Palmer Cup semifinals. On the international stage, Cocksedge was a critical cog in the Black Ferns unbeaten season. In the tightest Test of the season against England, Cocksedge scored 20 points as the Black Ferns edged the Red Roses 25-20 in London.

8: Kieran Read (All Blacks, Crusaders, Canterbury)
There aren’t many bigger shoes to fill in world rugby than Richie McCaw and Kieran Read did it superbly by leading the All Blacks to a successful season. Despite one hiccup against Ireland, the All Blacks went from strength to strength under Kieran Read’s leadership and deservedly secured the record for the most consecutive Test wins by a tier one nation when they beat Australia at Eden Park in October. Read’s hard-running, tireless work rate and lineout prowess were again a standout in 2016.

7: Ardie Savea (All Blacks, Hurricanes, Wellington)
After ruling himself out of contention for the New Zealand Sevens team at the Olympics, Ardie Savea’s fifteens game went to a whole new level. For the Hurricanes, Savea was a key performer with a competition high of 205 tackles and five tries helping the Hurricanes to their first Super Rugby title. Savea’s strong form earned a call up to the All Blacks where he played in 12 out of the 14 Tests throughout the year. Whether starting or coming from the bench, Savea’s high-energy style of play never changed.

6: Akira Ioane (Maori All Blacks, Blues, Auckland)
Whether playing for the Maori All Blacks, the Blues or Auckland, Akira Ioane terrorised opposition defenders with his explosive running and skilful ball skills. Able to switch between any position in the loose forwards, Ioane proved to be one of the hardest players of the year to contain with ball in hand. While not the finished product yet, Ioane looks set to become a potent weapon for the Blues well into the future. 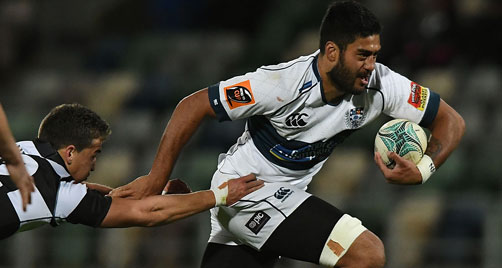 5: Scott Barrett (All Blacks, Crusaders, Canterbury)
Not many players made a bigger stride in their personal development in 2016 than Scott Barrett. Starting the season as third in the pecking order for the Crusaders second row behind Sam Whitelock and Luke Romano, Barrett was soon pushing both incumbent All Blacks for a starting berth with his proficient line out skills, high work rate and dynamic ball running. Barrett earned a Test debut in the loss against Ireland and scored a great individual try to keep the All Blacks in the game.

4: Sam Whitelock (All Blacks, Crusaders, Canterbury)
While long regarded as one of the world’s premier locks, Sam Whitelock stepped up as a leader in 2016 by taking over the Crusaders captaincy in the early-season absence of Kieran Read. In the black jersey, Whitelock played 11 Tests throughout the year and was once again impressive with his proficiency at set piece time, high work rate and ranging ball running.

3: Aotearoa Mata’u (Black Ferns, Counties Manukau)
One of the cornerstones of Counties Manukau’s Farah Palmer Cup success, tighthead prop Aotearoa Mata’u was immovable at scrum time and devastating with ball in hand during the Women’s Provincial Championship. The powerful prop earned a call up to the Black Ferns where she was the youngest player in the squad at 19-years-old. Mata’u made a big impact for the Black Ferns on the Northern Tour and scored a crucial try in the 20-10 win over Canada.

2: Dane Coles (All Blacks, Wellington, Hurricanes)
Dane Coles will be looking forward to a rest over the Christmas break after enjoying the biggest season of his career. Coles stepped up as Captain for the Hurricanes and led the club to their first Super Rugby title. For the All Blacks, there wasn’t a more courageous player as Coles played all 14 Tests – including nursing a painful rib injury through the All Blacks 42-8 win over Australia in Sydney. While his set piece play was adept, Coles was just as effective around the park and showcased his fine ball-playing skills throughout the season.

1: Wyatt Crockett (All Blacks, Crusaders, Canterbury)
It was another solid year for 33-year-old veteran Wyatt Crockett in the black jersey. The mobile front-rower brought up 50 Tests for the All Blacks during the year and proved to be a valuable mentor to younger front row colleagues Ofa Tu’ungafasi, Joe Moody and Codie Taylor. While not the flashiest player on the world scene, Crockett is an immensely valuable member of the All Blacks and never fails to perform his core roles to a high standard.

From history-making moments to clutch plays and displays of respect, check out our top 10 moments of 2016! 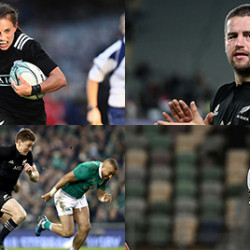 Andy Burt is a Wellington-based writer for allblacks.com and co-host of the All Blacks Podcast. He covers all levels of the domestic game in New Zealand and monitors the international game closely.